Gene therapies offer great promise for the future of medicine, with adeno-associated viral (AAV) vectors emerging as one of the leading delivery vehicles for these innovative therapies. However, the production of AAV-based therapies using HEK293 cells is a complicated process. Regulatory agencies have created expedited approval pathways for these promising, but complex, therapeutics. However, developers face important time constraints in developing robust manufacturing workflows. For these reasons, a successful chemicals, manufacturing, and control (CMC) strategy must be established as soon as possible to prevent delays during clinical trials. To support the implementation of this strategy, AAV manufacturers are looking for solutions to accelerate process and analytical development, notably those that can help with the selection and optimization of a suitable cell culture medium. The Gibco™ Viral Vector HEK Media Panel is the first panel solution for gene therapy manufacturers, and it has the potential to accelerate media optimization. The following article describes how the media panel can be used to quickly identify media candidates for multiple HEK293 cell lineages.

Gene therapy is a rapidly growing field of medicine that uses viral vectors to deliver genetic material to cells to compensate for abnormal, faulty, or missing genes. Of these viral vectors, recombinant adeno-associated viruses (AAV) are emerging as one of the leading delivery vehicles. This is due to the lack of disease associated with the wild-type virus and its ability to transduce dividing as well as nondividing cells. There are also multiple serotypes available, including those that can be engineered with differing cell type selectivity and immunogenicity, which developers can exploit for more specific therapies. The availability of these serotypes increases the usability of the vector, advancing the commercial potential of AAV-based gene therapies.

AAV-based gene therapies are seeing rapid growth, with multiple products already approved and over a hundred in clinical trials [1]Wagner HJ, Weber W, Fussenegger M. Synthetic biology: emerging concepts to design and advance adeno‐associated viral vectors for gene therapy. Adv. Sci. 2021; 8(9): 2004018. , which has fueled the demand for cGMP production solutions and the expansion of manufacturing capacity for viral vectors. Regulatory agencies such as the US Food and Drug Administration (FDA) and the European Medicines Agency (EMA) have given gene therapies expedited regulatory approval pathways. These initiatives include Fast Track designation and Breakthrough Therapy status from the FDA [2]Tendrick TL (2018). Overview of the regulatory path to commercializing a gene therapy. Cell Culture Dish.  and the PRIME scheme from the EMA [3]European Medicines Agency (2021). PRIME: priority medicines.. For this reason, commercially viable and scalable supply chains need to be established as early as the beginning of a Phase 1 clinical trial, with a robust chemicals, manufacturing, and control (CMC) strategy in place as soon as possible to prevent delays in getting AAV products to late-stage clinal trials.

As a result, manufacturers are focused on developing and improving scale-up and analytical assays to generate highly pure and potent AAV vectors. One step toward this goal is the selection and optimization of a suitable cell culture medium.

Selecting the optimal medium for an AAV manufacturing workflow has the potential to not only improve titers, but also improve viral particle quality, and it will ultimately simplify the scale-up process. Unfortunately, media formulations are complex and composed of potentially over a hundred components, all of which play a significant role in cell growth and productivity. Optimizing formulations effectively can require in-depth analysis of the key performance drivers in the formulation. This medium optimization process is time-consuming, and gene therapy manufacturers must balance this with the accelerated timelines introduced by regulators to prevent delays.

When it comes to media optimization, AAV developers and manufacturers have previously only had two options. The first is the development of a proprietary formulation designed specifically for the cell line and process. However, the development of a proprietary formulation requires lengthy R&D studies and significant investment, followed by extensive sourcing and qualification of raw materials for manufacturing. For this reason, many developers opt for the second option of off-the-shelf catalog formulations, which are readily available. This, however, does not account for the time taken to find and select a medium suitable for optimization. As most catalog formulations aren’t designed for specific cell lines or processes, developers need to spend considerable time evaluating media from several suppliers after early proof-of-concept studies. Once a medium is selected, additional time is needed to further optimize it to improve process performance as they scale up and optimization need to be repeated for different iterations of a platform process.

Media panels are a new third option for AAV manufacturers. Media panels contain a diverse set of formulations that offer the greatest amount of nutritional diversity in a small library. They are purposely designed to help reduce the time spent screening for an ideal medium. Although media panels have been available for other applications such as CHO-based mAb manufacturing, they have not previously been available for gene therapy applications.

The Gibco™ Viral Vector HEK Media Panel – with five serum-free and chemically defined media – has been developed to support enhanced performance in HEK293 cell culture. It has the potential to offer increased viral vector titers or quality in some HEK293 cell lines and at least two AAV serotypes. As Table 1 shows, the compositions of the formulations are unique with varying concentrations of key nutritional components. This will allow AAV manufacturers to rapidly screen for improved media performance and recognize the key drivers behind the improved performance.

One of the key advantages of the Viral Vector HEK Media Panel is its versatility, enabling five media to be evaluated for a broad range of HEK293 cell lines quickly. This versatility was demonstrated in the following experiments, where HEK293F and HEK293T cells were used to produce AAV2 and AAV8, respectively.

Two suspension HEK293F clones, from the Gibco™ FreeStyle™ 293-F cell lineage, designated 293F1 and 293F2 were evaluated for growth and titer production. The clones were directly adapted from the banked medium to Gibco™ FreeStyle™ F17 Expression Medium as the control medium or one of the five panel media (designated panels 1–5). All cultures were supplemented with Gibco™ GlutaMAX™ Supplement.

Prior to transfection, the population doubling times for the 293F1 and 293F2 cells in all five panel formulations were shown to be comparable to the control (Figure 1 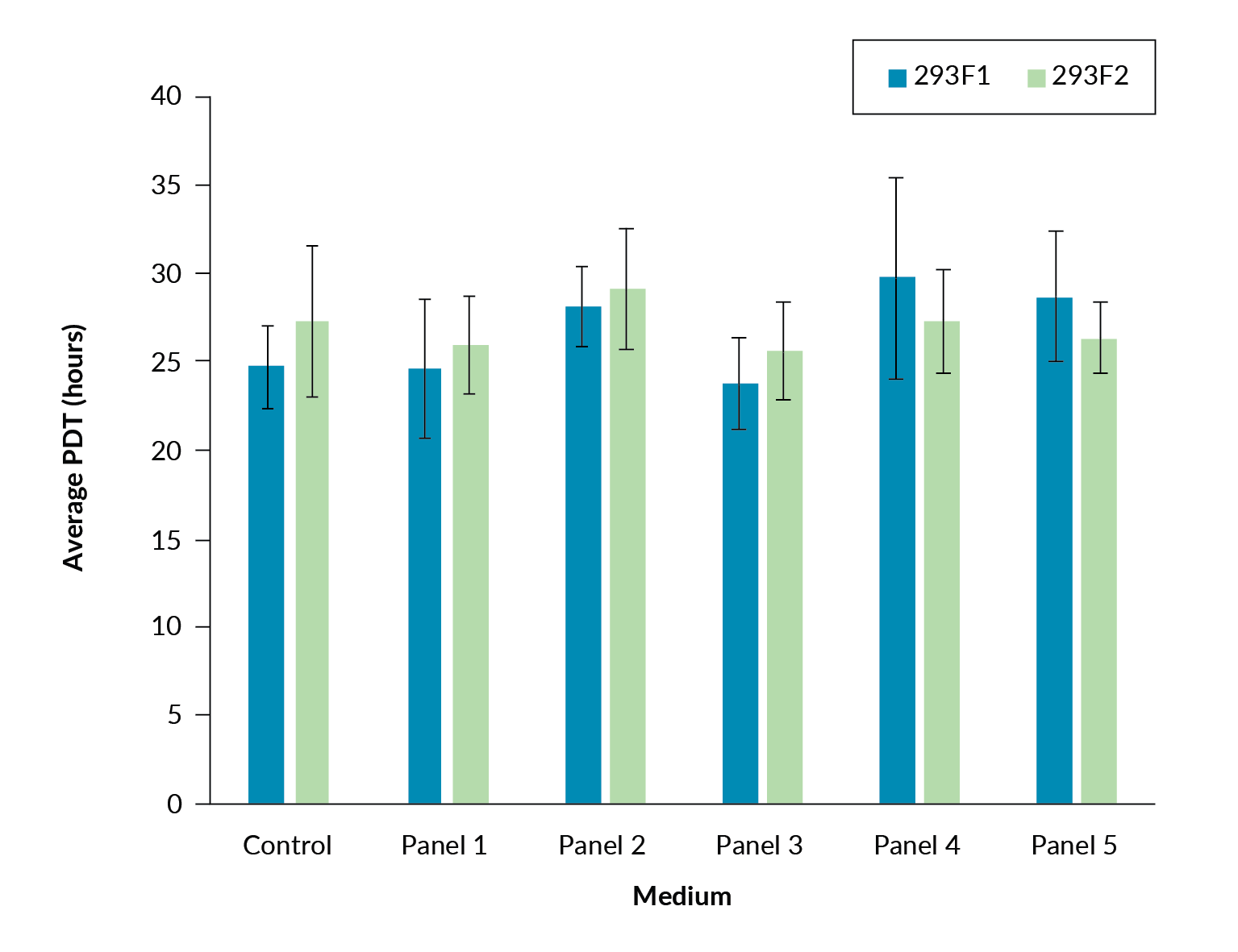 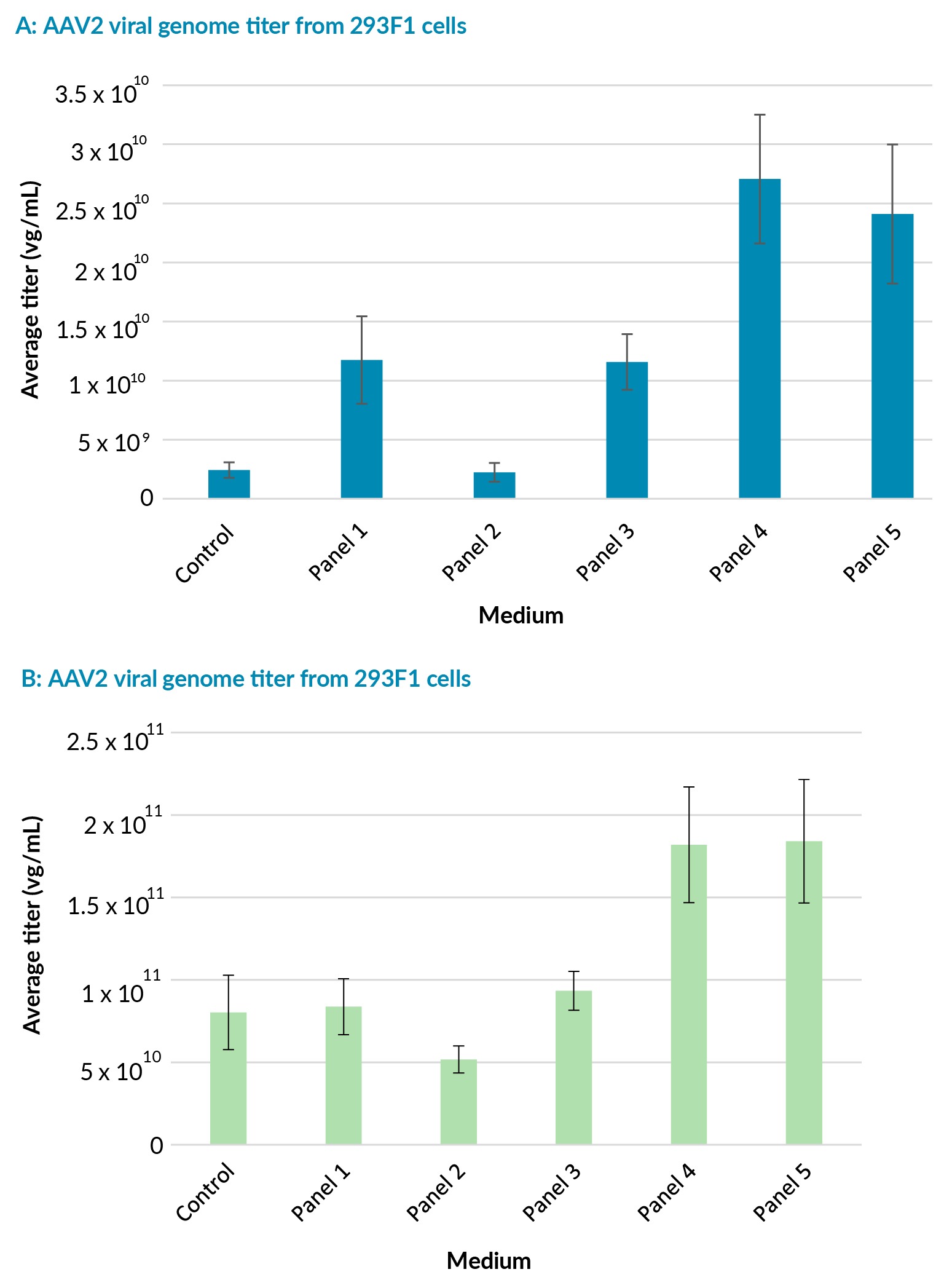 The population doubling times of cells cultured in Viral Vector HEK media 1 and 5 were comparable to the doubling times in the control medium (23 ± 1 hour, at the 3rd passage in 100% of the respective medium), regardless of their very differentiated compositions. This demonstrated the ability of the panel to also support sufficient growth for productive AAV8 transfection (data not shown). 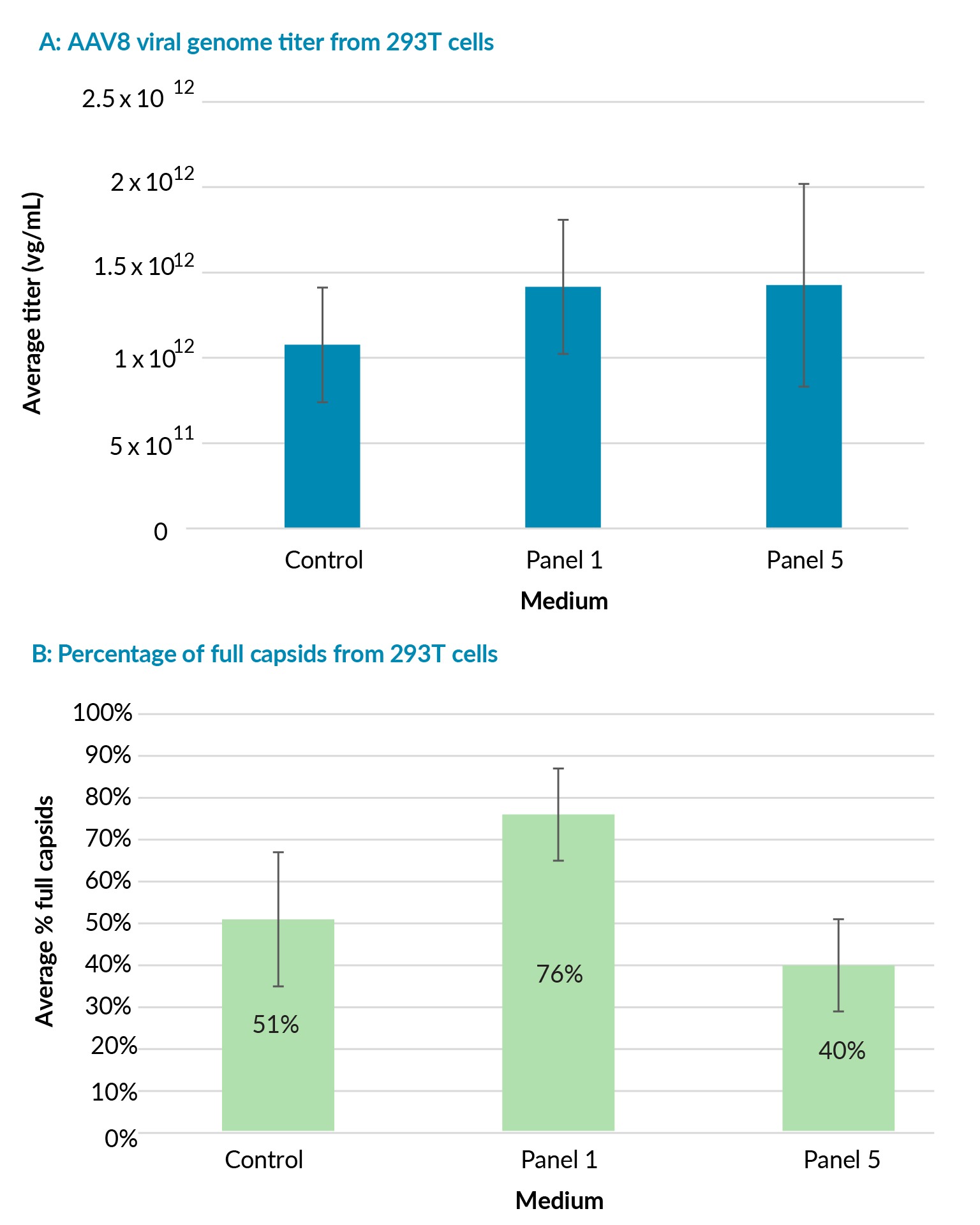 AAV manufacturers must be able to rapidly identify media formulations candidates that can be adopted for their HEK293 cell lines, AAV serotypes, and transfection processes. The Viral Vector HEK Media Panel is the first available media panel that allows AAV manufacturers to accelerate and simplify media optimization. The Viral Vector HEK Media Panel enables rapid screening of candidate media that may support higher titers and better quality with diverse HEK293 cell lines while maintaining steady growth. This allows manufacturers to identify promising media formulations faster and establish unique workflows that are in line with the diversity of platforms being developed in viral vector manufacturing.

Contributions: All named authors take responsibility for the integrity of the work as a whole, and have given their approval for this version to be published.

Acknowledgements: We thank the Institute of Experimental Biology and Technology (iBET, Portugal) for their contribution to this work on performing HEK293T growth and AAV8 productivity evaluations of the Viral Vector HEK Media Panel. All other development and experimental work were performed by Thermo Fisher Scientific R&D team (Grand Island, USA).

Funding declaration: The authors received no financial support for the research, authorship and/or publication of this article.

Copyright: Published by Cell and Gene Therapy Insights under Creative Commons License Deed CC BY NC ND 4.0 which allows anyone to copy, distribute, and transmit the article provided it is properly attributed in the manner specified below. No commercial use without permission.

Céline Martin is currently a Senior Product Manager for gene therapy. She has been part of Thermo Fisher Scientific since 2017 and joined to provide bioprocess scientists with the right tools to make the world healthier. She has a Ph.D. in Bioprocessing from the French University of Lorraine, where she focused on the impact of bioreactor hydrodynamics on MSC microcarrier culture. She worked as an upstream development scientist prior to joining Thermo Fisher to optimize CHO, HEK, and ESC processes. Her current focus is on managing and developing new solutions for gene therapy manufacturing.

Jennifer Zatina is a Product Manager for Gibco™ PD-Express Services who joined Thermo Fisher Scientific in 2020. Her responsibilities include bioproduction analytics and media and feed panels. Prior to joining Thermo Fisher, she spent over 10 years working in product development and management in the dietary supplement industry.

This article is part of the Vectors channel, Upstream Bioprocessing edition