BioInsights - Thinking big: the need for innovation in the production of lentivirus-based cell and gene therapies 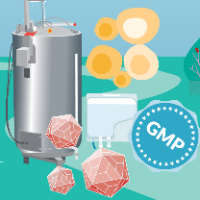 Thinking big: the need for innovation in the production of lentivirus-based cell and gene therapies

Hanna M. Leinonen holds a PhD in Molecular Medicine from the University of Eastern Finland (2014). She has 15 years’ experience on lentiviral vectors and 6 years’ experience on bioprocessing. She is currently working as a Senior Scientist in Kuopio Center for Gene and Cell Therapy (Finland) focusing on development of upstream processing for viral vectors (lentivirus, adenovirus, AAV).

John Moscariello currently serves as Executive Director of Viral Vector and Gene Editing Process Development at Bristol-Myers Squib (BMS). At BMS, John’s group develops viral vector processes that enable rapid timelines to generate clinical viral vectors as well as the development and characterization of commercial viral vector processes. Prior to his work at BMS, John was the Vice President of Process Development at AGC Biologics where his team was responsible cell line development, upstream and downstream process development, analytical and formulation development, and technical support for AGC Biologic’s commercial manufacturing facility and supported development activities from generating processes for Toxicology/Phase 1 supply up to and including commercialization and post-approval process support. John is very active in the biotechnology community. He is on the Scientific Advisory Board for various conferences, including the BioProcess International conference series, and the CBI conference series on achieving efficient facilities and the next frontier of single-use technologies. John obtained his Ph.D. in Chemical and Biological Engineering from the University of Wisconsin-Madison, and his B.Eng. in Chemical Engineering from the University of Delaware.

As Director of Process Research and Development, Lee helps drive development, innovation and improvements in world-class lentiviral vector manufacturing processes, applying scientific and engineering principles to all aspects of upstream and downstream process development, including process optimisation and scale-up, technology transfer to GMP manufacturing and process characterisation to support chemistry, manufacturing and controls (CMC) regulatory submissions. As part of the Process Research and Development team, Lee works at the cutting edge of gene therapy, ensuring its applicability to the needs of the wider gene and cell therapy community. The team’s mission covers the life cycle of gene therapies, taking processes from the early phase development work through to fully optimised large scale, GMP-ready processes, manufacturing and commercialisation. Prior to joining Oxford Biomedica 6 years ago, Lee worked at the University of Oxford as a postdoctoral researcher and obtained a D.Phil in Gene Therapy for Cystic Fibrosis.

Scott has over 20 years experience working with viral vectors, vaccines, and biologics in GMP environments. He has been responsible for cleanroom design, build out and commissioning of vector facilities, as well as the oversight of viral vector, cell therapy, fill finish and manufacturing support departments. Scott started his career at Merck and Co. where he worked on the development of an Adenovirus-based HIV vaccine and later, the development, optimization, and validation of release assays for live virus vaccines. He then moved to Indiana University (IU) where he managed the IU Vector Production Facility (IUVPF), overseeing GMP production and testing of Lentiviral and Retroviral vectors for the IUVPF and the National Gene Vector Laboratories (NGVL). While at the IUVPF he also managed the design, build and commissioning of a new viral vector GMP production and testing facility. After leaving the IUVPF, Scott joined Cincinnati Children’s Hospital Medical Center (CCHMC) managing the GMP Vector Production Facility, Viral Vector Core, and the Aseptic Processing Labs. Scott then moved to the University of Florida where he was the Director of Cell Therapy, Fill Finish and Manufacturing Support Operations for Florida Biologix and Brammer Bio. He was also responsible for the design of two new fill finish suites. Most recently, Scott served as Vice President of Vector Operations at Orchard Therapeutics where he was one of the original ten members and responsible for viral vector development, GMP vector production, plasmid production, oversight of 10 CDMOs, due diligence, and facility design.

Will Junker is Head of Vector Quality and oversees the operation of QC, QA and QE to bring Kite’s vector manufacturing facility on line through licensure. Before this role, Will built Kite’s Quality Engineering function globally. His 35 year career in BioPharma includes 13 years at AstraZeneca and 15 years at Aventis/Sanofi as well as a few years at Baxter BioScience in technical/quality roles of increasing responsibility.

You can watch the full roundtable discussion at the bottom of this page or you can view or download the poster here.

This article is part of the Vector bioprocessing spotlight